We detected that you're using an older version of Internet Explorer. please upgrade IE 11 or later

Alternatively, you can install and use these secure and newest browsers: Chrome | Firefox | Safari for MacOS | Edge for Windows

For many people across the country, sleep apnea is a major issue. Patients with this problem may find themselves extremely tired during the day because they aren’t getting quality sleep at night, and over time, this can lead to drastic health consequences. Rather than struggle with the effects of sleep apnea, patients return to a restful night of sleep with the help of the oral surgeons at Reston Advanced Oral and Cosmetic Facial Surgery. 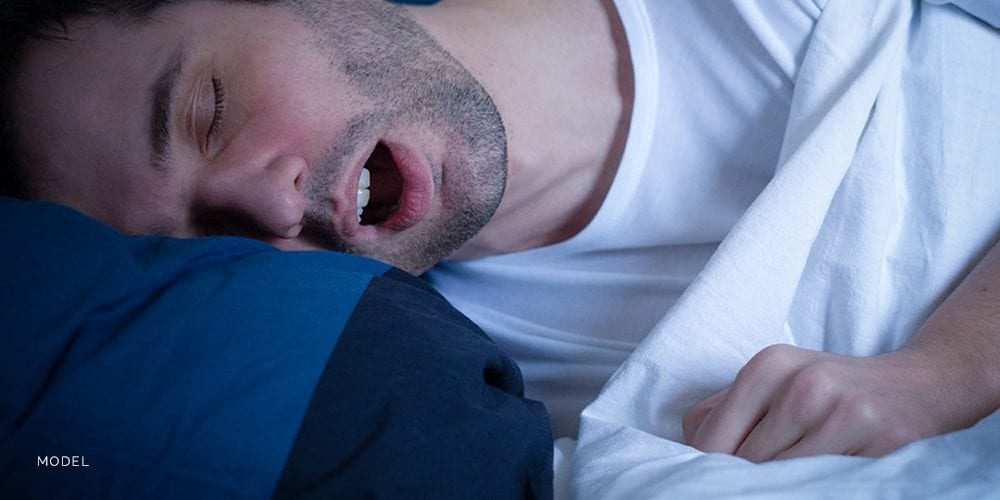 What Is Sleep Apnea?

Sleep apnea is a sleep disorder involving irregular breathing patterns. The most common form of this condition is called obstructive sleep apnea. In this variant, the tongue collapses against the back of the throat when a person goes to sleep. This hinders the normal flow of air and stops the person from inhaling. Eventually, the brain realizes oxygen levels are low and will partially awaken the person to restart their breathing. This process repeats itself throughout the night, preventing the person from ever reaching deeper, restorative stages of sleep.

What Are the Symptoms of Sleep Apnea?

A person with sleep apnea might not realize they have it, as many of the most noticeable signs are only apparent to an observer. For example, people with sleep apnea often snore loudly, wake up from sleep gasping for air or coughing, or periodically stop and start breathing during sleep.

However, there are a few symptoms people can look out for on their own, including:

What Are the Risk Factors for Sleep Apnea?

While sleep apnea can happen to anyone, there are a few risk factors involved. Most sufferers:

What Are the Treatments for Sleep Apnea?

Luckily, there are plenty of ways to help put an end to sleep apnea and its troublesome symptoms. Our doctors will work with each and every patient to ascertain the best method of treatment. They will carefully examine the entire maxillofacial region, assess the level of obstruction using a skull X-ray, and even order a sleep study to determine the cause and severity of the sleep apnea.

After achieving a diagnosis, treatment might consist of the following options:

By collaborating with Reston Advanced Oral and Cosmetic Facial Surgery, patients can finally put an end to their restless nights of sleep. Sleep apnea treatments can help you feel better during the day and improve your overall health.

Please be aware that this is not a secure email network under HIPAA guidelines. Do not submit any personal or private information unless you are authorized and have voluntarily consented to do so. We are not liable for any HIPAA violations. Understand that if you email us, you are agreeing to the use of an unsecured method and understand that all replies will be sent in the same fashion, which you are hereby authorizing.